Allergy Testing (skin prick, patch testing, and specific IgE)
Once the diagnosis of EoE is confirmed, allergy testing is typically requested. In many situations, avoiding ‘allergens’ that trigger the eosinophils will be effective treatment. This may include both environmental allergens or food allergens. In regards to foods, the reactions are not always ‘immediate hypersensitivity’ (IgE-mediated). This means that a food can be consumed with no obvious reaction to it, but over a period of days to weeks the eosinophils triggered by the food will cause inflammation and injury to the esophagus. For this reason, food logs (keeping track of foods and symptoms) may not identify the offending food. During food trials, an individual with EoE may try introducing a new single food and waiting a few days to weeks before introducing another food. Traditional percutaneous skin testing is very good at identifying immediate sensitivity (IgE-mediated) to environmental and food allergens. Having a negative immediate percutaneous skin test results does not always mean an offending allergen is not an issue. Sometimes a physician may recommend skin patch testing to look for delayed reactions. At this time, intradermal allergy testing is not routinely recommended for diagnosis of EoE.

Skin patch testing can be used when testing for delayed food reactions. Skin patch testing is most commonly used to test for dermatologic (skin) reactions. When used for food reactions, small amounts of a pure food are placed in tiny cups, which are then taped to the back. The foods will be chosen based on the patient’s diet, previous reactions, and prior skin prick test results. The patches are removed after 48 hours and read at 72 hours. 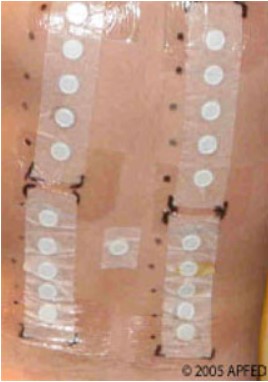 IgG serum testing measure the IgG level to certain foods and allergens in blood serum. This is also done in some commercial clinical laboratories. Testing for serum IgG levels for foods has not been demonstrated scientifically to be useful in the diagnosis of immediate IgE-mediated allergies or diseases such as EoE.

Another major difference between prick skin tests and patch testing is the standardization of reagents. The materials for prick skin testing are commercially available and standardized. For prick skin testing, we use purified extracts and prick or scratch with a needle or specialized tool. After scratching, the results are read for redness and swelling (wheal and flare) in 10-15 minutes. In contrast, the reagents for patch testing are not standardized. In patch testing, fresh foods are prepared into a porridge-like consistency and placed on aluminum chambers on the patient’s back for 48 hours. The patches are then removed and read 24 hours later for redness and swelling. The preparation of the fresh food is not standardized and probably accounts for the variability in the testing results from one physician to another. However, the time frame for reading, placement and scoring of the patch is standardized.

Most patients can identify the foods that are positive on prick skin testing as the immediate time frame from ingestion to reaction, thus helping the family and physician decide which foods to test for. This is not the case for patch testing. Since there is a delayed reaction to foods and difficulty identifying foods, we typically screen for the most commons foods in the patient’s diet including milk, soy, egg, grains and meats.

Other testing including IgG, Immune-complexes to foods have not been well studied in food allergy.

We instruct our patients to avoid all the foods that are positive on skin test or patch testing. Patients reported improvement in symptoms and normalization in biopsies about 75% of the time, including the patients that were started directly on elemental diet for nutritional reasons. The reasons for missing foods in 25% include not testing for the appropriate foods, poor testing techniques or non-compliance with diet. It is also important to note that testing can have false positives or false negatives, by either skin testing or patch testing and biopsies remain the gold standard.

Question : Do environmental allergies play a bigger role in EGID than originally thought?

Answer: They might, in some cases, it depends on the specific patient and the type of allergies. Most likely, yes, environmental factors can play a role in eosinophilic disorders. Allergic reactions do not occur exclusively in the GI tract; various systems are processes are linked. What you breathe in might make you more prone to react. Dr Marc Rothenberg of Cincinnati Children’s has shown in his research that mice develop EoE after mold has been introduced to their lungs. This process is not proven in humans, but we think that people develop EoE as a combination of genetic and environmental factors; someone might be more prone to develop EoE genetically, but the disorder only develops when a specific set of conditions in their outside environment trigger the response. Limiting exposure to known environmental allergens is recommended to help reduce reactions.

Question : Are food trials recommended during the seasonal allergy season that affects the patient?

Answer: If a patient is sick or having symptoms, it is not recommended to trial foods. The level of reactions of an allergic patient during the allergy season is increased, leaving a patient at risk for more severe reactions and false positives to a food during a trial, and thus it is preferable not to test during this time. Learn more about food trials.

Question : I’ve read that many people with eosinophilic esophagitis have a soybean allergy. Is soy lecithin okay to ingest? I’ve found it in several things including ice cream, chocolate candy bars, chewing gum and vitamins, to name a few examples.

Answer: The great majority of food allergies are to food proteins. Lecithin is a phospholipid (a type of fat) and I would not expect an allergic reaction to it. Some patients, however, could react to a product containing soy lecithin due to cross contamination of other soy protein during the manufacturing process.

© American Partnership for Eosinophilic Disorders (APFED) 2008-2016 All rights reserved. Content may not be reproduced in whole or in part without express written consent from APFED. Contact us at mail@apfed.org. Contributors: Wendy Book, MD; Harvey Leo, MD