By Dr. Gerald Gleich Professor of Dermatology and Medicine at the University of Utah

Eosinophilic fasciitis (EF) was described in 1975 by Shulman as diffuse fasciitis (thickening and inflammation of the connective tissue beneath the skin) with eosinophilia. Subsequently many cases have been described with varying presentations and with varying responses to treatment. EF is characterized by symmetrical skin induration and, in the acute stage, is marked by swelling (edema) and pitting of the extremities. Although swelling may be the presenting feature of eosinophilic fasciitis, with time hardening of the skin and the subcutaneous tissue occur, such that these tissues are firm with a “woody” texture. The skin may also appear irregular and is described as resembling the skin of an orange (peau d’orange).

Most commonly EF involves the extremities, both arms and legs, and the fingers, feet and face are spared. Sparing of these sites serves to distinguish EF from scleroderma where finger involvement is often one of the first signs. Patients with long-standing EF may develop joint contractures (loss of joint motion due to the hardening of the skin in areas adjacent to the joint) resulting in impaired mobility.

The diagnosis of EF is made by obtaining a biopsy of the skin extending through the subcutaneous tissues to muscle. Typical pathology is thickening of the connective tissue beneath the dermis extending to the muscles along with infiltration of eosinophils and other inflammatory cells. Patients commonly present with blood eosinophilia although ordinarily this is not as marked as seen in diseases such as the hypereosinophilic syndrome. Some patients will develop EF after vigorous exercise. Uncommonly patients may also present with myopathy, peripheral neuropathy and carpal tunnel syndrome as well as inflammatory arthritis, autoimmune thyroiditis and lymphadenopathy. Of greatest concern is the development of hematologic abnormalities such as hemolytic anemia, thrombocytopenia or lymphoma.

The etiology of eosinophilic fasciitis is unknown. Blood cells from patients with EF produce increased amounts of interferon gamma and interleukin-5 in culture, and biopsies show evidence of eosinophil degranulation with release of highly cationic and toxic granule proteins into the skin. These proteins have the capacity to stimulate cells to produce factors causing fibrosis such as transforming growth factor beta.

Treatment of EF is haphazard, although glucocorticoids such as prednisone have commonly been used and are often apparently efficacious. However, no controlled intervention trial has been performed. Other treatments include cyclosporin, mycophenolate mofetil, cyclophosphamide, azathioprine, hydroxychloroquine and dapsone. The course of treatment can be gauged by performance of magnetic resonance imaging (MRI) which permits measurement of the connective tissue thickness. With the use of MRI one can determine whether a particular treatment is reducing this thickness and whether the treatment is effective.

A patient’s story: IS THAT AN ORANGE PEEL ON YOUR SKIN, OR DO YOU HAVE EOSINOPHILIC FASCIITIS? Emily was in good health and regularly exercised on a treadmill, often up to an hour. One day after exercising especially forcefully, she noticed that her arms were swollen, and her muscles were painful. She also became fatigued. The swelling worsened even after she stopped exercising. Soon her forearm skin became taut, and within a month she began to have difficulty extending her forearms. Her husband said that her skin looked like an orange peel.

She consulted her physician who carefully examined her and ordered blood tests. On a return visit he told her that the numbers of eosinophils were elevated in her blood. Magnetic resonance images (MRI) showed an increase in thickness of connective tissue between skin and muscles. Her doctor advised a biopsy and warned her that it should include not only skin but tissue beneath down to her muscles. The biopsy showed thickening of the connective tissue below her skin and increased numbers of eosinophils and other inflammatory cells. A consultant told her that she suffered from eosinophilic fasciitis (EF) and that she should be given a medication to reduce inflammation. He also told her that EF commonly involves the extremities, both arms and legs, and that fingers, feet and face are spared. Emily was reassured that sparing of these sites distinguishes EF from scleroderma (a more serious fibrosing disease involving both skin and internal organs where finger involvement is often one of the first signs). The consultant also told her that the cause of EF disease was unknown and that no medication had been tested in a proper clinical trial.

By this time Emily was really worried. She began Googling to learn about EF. What she found on Wikipedia was that EF was described in 1975 by Dr. Lawrence Shulman at Johns Hopkins School of Medicine and that Shulman originally called it diffuse fasciitis with eosinophilia. Fasciitis means a thickening and inflammation of connective tissue. Emily learned that EF is a rare disease and that about 200 cases have been described in the medical literature. She found that EF is characterized by symmetrical skin involvement and, in the acute stage, is marked by swelling (edema) and pitting of extremities just as she had experienced. With time hardening of skin and subcutaneous tissue occurs, and these tissues are firm with a “woody” texture. The loss of motion of her elbow joints was called a contracture and the loss of joint motion was due to hardening (fibrosis) of skin in areas adjacent to joints resulting in impaired mobility.

By now Emily was becoming quite knowledgeable about EF. Her doctor sent her a link to a database called Up-to-date that she studied to learn about EF and other eosinophil-associated diseases. She found that some patients with EF develop severe muscle disease (myopathy) and other problems such nerve inflammation (neuropathy), thyroid disease (thyroiditis) and swelling of lymph glands (lymphadenopathy). She and her physicians systematically eliminated these by careful evaluations and laboratory tests. Further evaluations ruled out other diseases such as anemia (hemolytic anemia due to production of antibodies against her own blood cells), reduction of blood platelets (thrombocytopenia) and tumors of the lymph glands (lymphoma).

As Emily became more knowledgeable about EF, she and her doctor reviewed what is known about how EF is caused. They discovered that EF was part of a disease called the eosinophilia-myalgia syndrome that occurred as an epidemic in 1988-1990 and that patients with this disease had taken a health food called L-tryptophan. Once L-tryptophan was banned by the FDA, the epidemic stopped. So something in that health food caused EF in these patients. They discovered that blood cells from patients with EF produce increased amounts of a hormone-like protein called interferon gamma and another protein called interleukin-5, and that biopsies show evidence of eosinophil degranulation with release of highly cationic and toxic granule proteins into skin. They learned that these proteins can stimulate cells to produce factors causing fibrosis.

They found that treatment of EF is haphazard and that no proper clinical tests of medications have been done. She and her doctor discussed treatment with medications including prednisone, and other drugs such cyclosporin, mycophenolate mofetil, cyclophosphamide, azathioprine, hydroxychloroquine and dapsone. She started prednisone at a dose of 60 mg per day, and another MRI showed that the thickened connective tissue layer had shrunk. After a month of prednisone treatment she had gained 10 pounds of weight. She now realized the plight of patients with EF, and the difficulties they confront. She asked the consultant about antibodies to interleukin-5 because these antibodies have shown promise in treatment of the hypereosinophilic syndrome and eosinophil-associated asthma.

She and her physician continue to experiment with new medications to treat her disease, and after six months MRI continues to show improvement. She can now fully extend her elbow and her skin is softer. However, she still has some bad days, and she worries that her EF may last longer than she had thought.

© American Partnership for Eosinophilic Disorders (APFED) 2011-2016 All rights reserved. Content may not be reproduced in whole or in part without express written consent from APFED. Contact us at mail@apfed.org. Author: Gerald Gleich, MD 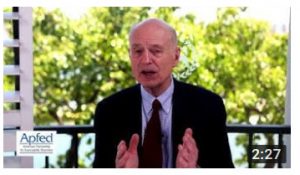 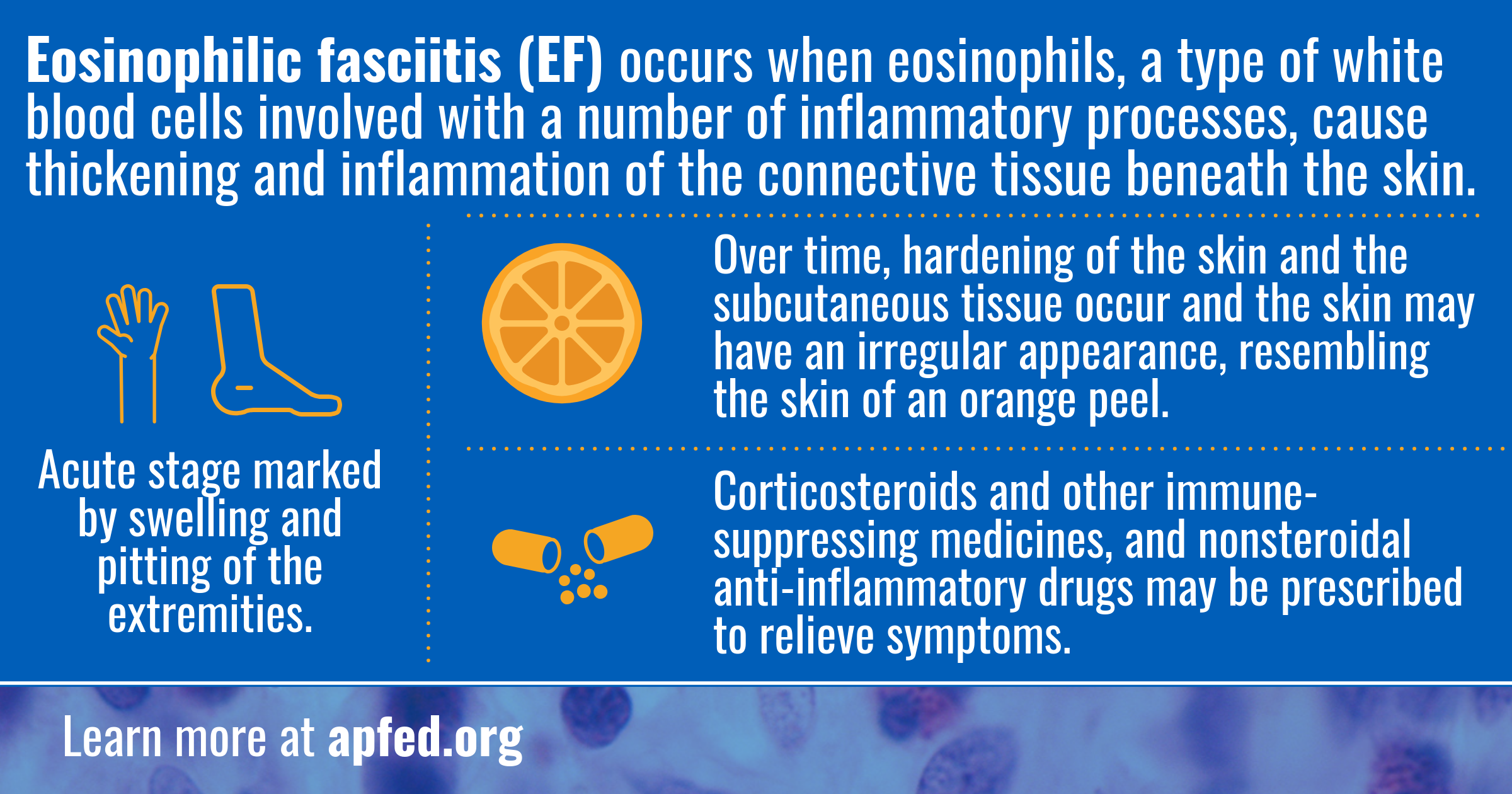 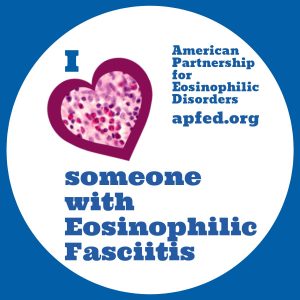